Commodity production is in the hands of few players

END_OF_DOCUMENT_TOKEN_TO_BE_REPLACED

Oil. US Import Revolution in Numbers

OPEC often touts its 81% share of global “proven” reserves of oil. However, today it seems like OPEC’s peak influence is in the rear-view mirror due to several external factors. To start with the obvious, oil is slowly waning in importance in the global energy mix. According to the EIA, oil made up 34% of total global energy demand in 2010. By the year 2040, the EIA expects this share will be closer to 30%, though things could happen faster if the technology behind renewables and batteries makes a bigger impact than expected.

Next, U.S. domestic production has almost doubled because of the shale and fracking revolution. In 2008, the U.S. produced 5.0 million bpd, and in 2015 the country averaged 9.4 million bpd. Lastly, as you can see on the chart, accelerated development of Canada Oil Sands has enabled the U.S. to buy any imports needed from Canada instead of the Middle East. In 2005, Canada only supplied 16.1% of U.S. oil imports, but Canada is now the major supplier of oil to the U.S. with a massive 43.0% share.

END_OF_DOCUMENT_TOKEN_TO_BE_REPLACED

An Annotated History Of Oil Prices Since 1861

Oil price volatility is not new…

END_OF_DOCUMENT_TOKEN_TO_BE_REPLACED

Fears of a deepening non-OPEC supply crunch in response to the latest oil price slump may be overdone as many producers are absorbing short-term losses in the hope of a price rebound, according a new study by research group Wood Mackenzie. Citing up-to-date analysis of production data and cash costs from over 10,000 oil fields, Wood Mac said it believes 3.4 million b/d, or less than 4% of global oil supply, is unprofitable at oil prices below $35/b.

Even the majority of US shale and tight oil, which has been under the spotlight due to higher-than-average production costs, only becomes cash negative at Brent prices “well-below” $30/b, according to the study. For many producers, being cash negative is not enough of an incentive to shut down fields as restarting flow can be costly and some are able to store output with a view to selling it when prices recover.

“Curtailed budgets have slowed investment, which will reduce future volumes, but there is little evidence of production shut-ins for economic reasons,” Wood Mac’s vice president of investment research Robert Plummer said in a note. “Given the cost of restarting production, many producers will continue to take the loss in the hope of a rebound in prices.” Even since oil prices began sliding in late 2014, there have been relatively few outright field production halts due to low prices, with only around 100,000 b/d shut in globally, according to the study.

Despite widespread fears of a major supply collapse, the US’ shale oil output since late 2014, sharp deflation in service sector costs and greater drilling efficiencies have seen shale oil output remain more resilient to lower prices than first thought. Wood Mac said falling production costs in the US over the last year have resulted in only 190,000 b/d being cash negative at a Brent price of $35/b.

The latest study contrasts with a similar report from the research group a year ago when it estimated that up to 1.5 million b/d of output – focused in the US – was vulnerable to being shut in at $40/b Brent. At the time, US tight oil production was expected to start becoming cash negative a Brent oil price in the “high $30s”. In the past year we have seen a significant lowering of production costs in the US, which has resulted in only 190,000 b/d being cash negative at a Brent price of $35,” it said. END_OF_DOCUMENT_TOKEN_TO_BE_REPLACED

The history of energy consumption in the US. What’s next?

END_OF_DOCUMENT_TOKEN_TO_BE_REPLACED

The oil rig count is not important — yet

“This chart from Deutsche Bank’s Torsten Sløk shows that to date, the decline in rig count has not put a dent in production as less-efficient wells are taken offline”. END_OF_DOCUMENT_TOKEN_TO_BE_REPLACED

The Bright Side of Cheap Oil

By Burt White of LPL Financial

“The obvious place to start when analyzing beneficiaries of cheap oil is the consumer discretionary sector. The “tax cut” from lower prices at the pump is significant. U.S. consumers purchase about 140 billion gallons of gas annually, so a $1.00 drop in gasoline is a net savings of $140 billion (or about 1% of gross domestic product [GDP]). Each household that has been spending about $2,500 per year on gasoline (roughly the national average) will see a drop of perhaps $600 annually, based on U.S. Energy Information Administration (EIA) forecasts. For someone making the median income in the United States (about $52,000), that’s almost an extra week’s paycheck. And the total does not include home heating costs, where additional savings are captured, as the decline came just ahead of the coldest winter months (the sharp drop in natural gas prices is also helping). Depending on your assumptions, savings for the average American from lower energy prices could reasonably be estimated at over $1,000 per year, which for many, is like getting a raise. Keep in mind the consumer represents two-thirds of the U.S. economy. 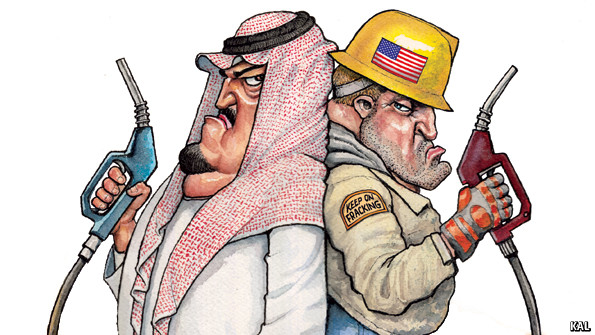