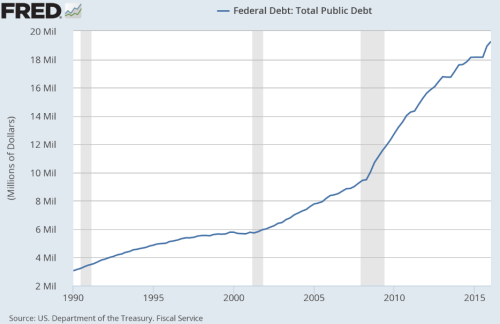 END_OF_DOCUMENT_TOKEN_TO_BE_REPLACED

Everybody makes mistakes. The difference between success and failure is how you deal with those mistakes. Nowhere is this more prevalent than in investing. Today I will highlight 3 of the most common mistakes I see investors make, and hopefully this will help you avoid the errors so many others have made.

1. Waiting to Get Even
It is common for investors to buy a stock that declines in value and then, regardless of underlying fundamentals, hold the stock until it at least gets back to the price they bought it for. Many people hate the idea of selling a stock at a loss, so they may hold on to a particular stock too long while other opportunities pass them by. Behavioral finance describes this as a cognitive error. By failing to sell certain stocks, investors can lose in two ways. First, they can hold onto the stock as it continues to decline in value and possibly ends up worthless. Second, there is an opportunity cost, where the stock could have been sold and proceeds reinvested in a stock with more upside that make up the value lost in a more timely matter.

No time was more evident of this than the dotcom bubble that burst in 2000 and led to a steep bear market. Many investors froze, not knowing what to do and did not sell until the value of their portfolio had been cut in half. END_OF_DOCUMENT_TOKEN_TO_BE_REPLACED

Should you sell in August?

“After making several attempts to break through the psychologically important 1700 level, the S&P 500 ended the week down about 0.1%. This is the first week since mid-June that the S&P 500 declined.  While I do not feel that the market is set for a large decline and see any substantial pullback as a long-term buying opportunity, I am expecting some degree of selling in the short-term. The reason is very simple. Although I expect the economy to accelerate in the second half of the year, the second quarter is looking relatively weak. Additionally, top-line revenue growth for the companies within the S&P 500 is looking more and more elusive and earnings growth is lackluster.

Instead of being driven by earnings, the market is rising because P/E multiples are expanding. At the beginning of the year, the S&P 500 had a P/E multiple, based on expected 2013 earnings, of 13.8. As of the end of July, the forward P/E multiple of the S&P 500 is 15.7 times projected earnings estimates.  Effectively, P/E valuation multiples have expanded by 13.7% so far this year. As of July 26th, the S&P 500 is up 19.9%, or 18.8% if you exclude dividends. This means that the majority of the market’s gain can be attributed to stocks becoming more expensive, not underlying earnings growth. END_OF_DOCUMENT_TOKEN_TO_BE_REPLACED

Will The Fed Kill Economic Growth?

“When the market is going up, there is a tendency for investors to become more risk averse. Research shows that people tend to be risk-seeking when dealing with losses and risk averse when dealing with gains. As a result, with the market hitting all-time highs, individuals surprisingly are starting to become a little more nervous with regards to the future direction of the market. It is important to remember that market movements are time independent events. The fact the market is hitting new highs has no statistical bearing on what is going to happen next. The market is no more likely to go up or go down given it has appreciated in the past. If anything, there is some data that shows if a market is exhibiting long-term momentum that momentum tends to persist for a few months. The odds of investing in the equity market, over long periods of time, are in an investor’s favor.

Generally speaking the market tends to appreciate at a rate that is roughly 600 basis points, or 6%, above the risk-free rate. The risk-free rate is the rate of return on 3-month treasuries. This rate of growth is surprisingly stable over time and is likely to persist in the future. As a result, on average, an equity investor should plan on having an investment in the market double every eight to ten years. This means if you perform as well as the market has historically, a $1 million investment should grow to roughly $2 million over a ten year period when factoring in the reinvestment of dividends. END_OF_DOCUMENT_TOKEN_TO_BE_REPLACED

What to expect from the second half of the year?

Mitch Zacks, Senior Portfolio Manager at Zacks Investment Management: “The S&P 500 gained 2.4% in the second quarter. Like many equity investors, I am anticipating that the second half of the year will be far more volatile than the first half. The reason for the volatility is that interest rates are going to be rising, which will play havoc with the fixed-income markets, and the stock market will likely suffer collateral damage. In the end, my best guess is that the S&P 500 will end 2013 roughly 3-4% higher than current levels due primarily to the strengthening economic recovery.

If it bleeds, it leads. This common saying in journalism refers to the notion that the more horrific or negative a story is, the more prominent it is displayed on the front page. This is certainly true of financial news headlines. Most of what you read on a financial websites and in a newspapers is just noise. Investors should never make investment decisions based on what they see in a headline. Rather than help you make good financial decisions, the media is more likely to scare you until you can’t sleep at night or cause you to sell all of your stocks at the first sign of a correction.

It is very likely the stock market is going to have a correction at some point this year and we may already be in one. The S&P 500 is off approximately 3.5% from its recent high. You can bet if that number reaches 6% or 7%, the media is going to begin writing stories about the death of this bull market and a possible recession ahead. Not very many reporters are going to write stories about how corrections are a normal and healthy part of bull markets and that we were overdue for one. END_OF_DOCUMENT_TOKEN_TO_BE_REPLACED