“Owning shares in a mutual fund or ETF has never been cheaper. According to Morningstar’s annual fund fee study, the asset-weighted fee for roughly 25,000 funds and ETFs averaged 0.518% in 2017, down from 0.562% in 2016. The 8% drop was the  biggest year-over-year decline since 2000, when Morningstar began tracking the data, and represents more than $4 billion in savings for investors, according to Morningstar. Driving the decline were investor preference for low-cost funds — flows into the cheapest 20% of funds within different categories surged 60% — and fee reductions by active funds.

“The cheapest 20% of funds raked in nearly $1 trillion last year while the rest of the industry saw net outflows of approximately $250 billion,” said Patricia Oey, senior manager research analyst at Morningstar, in a statement. “The message investors are sending is crystal clear — cost counts.” Passive funds were the biggest beneficiaries of these flows, accounting for 70% of new inflows; lower cost actively managed funds accounted for the rest.

Vanguard’s fees continued to be the lowest overall — 0.10% for its average asset-weighted expense ratio — followed by State Street at 0.16% and BlackRock’s iShares at 0.25%. Vanguard also saw the biggest decline in the asset-weighted average fee among 10 of the largest fund families, as measured by total AUM. Its fees fell a cumulative 25% over the past three years ended 2017, while iShares’ fees fell 19% and Fidelity’s dropped 14%.

Fidelity, however, showed the biggest year-over-year fee decline in 2017 — a 10% decline to 0.53%, due primarily to performance-related fees on many funds. Fidelity also introduced more than 80 lower-cost share classes in the past two years and cut fees on 14 index funds in 2017 but those cuts are not reflected in the Morningstar study, which based its fee data on fund companies’ annual reports. 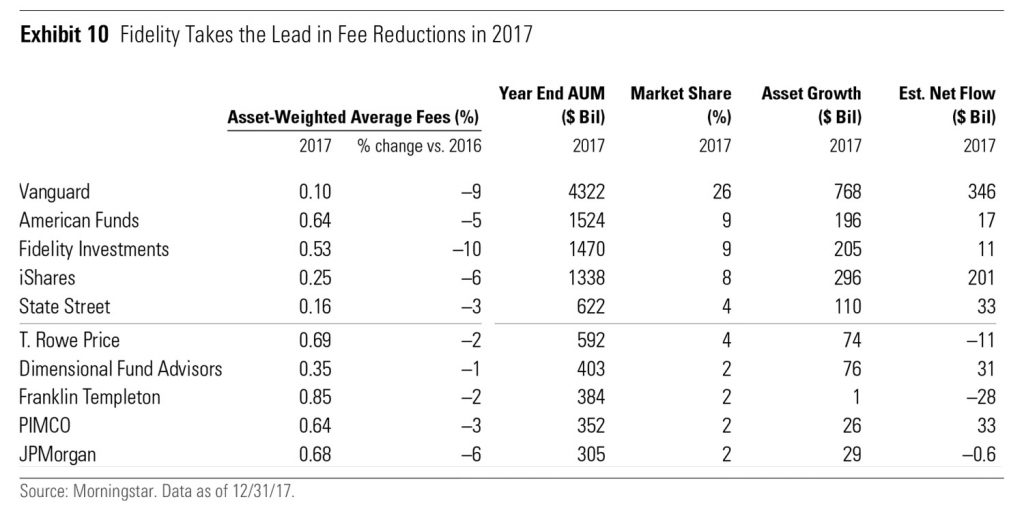 As a result of all these developments, most U.S. investors now own low-priced funds, which Morningstar defines as funds with low or below average fee levels within their categories. Such funds account for 83% of all mutual funds and ETFs, according to Morningstar”.