Self driving cars will mean that far fewer drivers and cars and trucks will be needed to fulfill many of the motor vehicle related tasks.
- Commuting
- Delivery of goods
- Non-commuting passenger travel

Nextbigfuture thinks car ownership reduction will lag the actual fall in private vehicle usage. This is because the older generations will be reluctant to give up owning vehicles even if they shift to robotic ride sharing for commuting. There is still vehicle ownership for status in cities like Hong Kong and New York where there is excellent public transit and taxis.

In Europe alone, the automotive (building cars) industry accounts for roughly 12 million jobs (including related jobs); in the US, more than 8 million; and in Japan, more than 5 million. The Bureau of Labor Statistics lists that 884,000 people are employed in motor vehicles and parts manufacturing, and an additional 3.02 million in the dealer and maintenance network. Truck, bus, delivery, and taxi drivers account for nearly 6 million professional driving jobs. Virtually all of these 10 million jobs will be eliminated within 10-15 years. Globally there are 50 to 100 million driving jobs.

- Eliminating the needs for car ownership will yield trillions in additional disposable income
- Having more productive commutes – enabling workers to work while commuting could potentially add 12-20% to productivity and GDP
- Supply chains and movement of goods could be vastly more efficient
- Traffic jams could be eliminated
- Traffic accidents, traffic injuries and deaths could be virtually eliminated
- Existing road capacity could be boosted by over 5 times
- Cities could be transformed
- Many elderly people can no longer drive safely. Robotic cars will help them to be more mobile and independent

Automation of driving has the potential to save over a million lives per year globally from reducing fatal car accidents. Google has claimed the robotic car could:

About 5.5 million motor vehicle accidents occurred in 2009 in the U.S., involving 9.5 million vehicles. These accidents killed 33,808 people and injured more than 2.2 million others, 240,000 of whom had to be hospitalized. Adding up all costs related to accidents—including medical costs, property damage, loss of productivity, legal costs, travel delays and pain and lost quality of life—the American Automobile Association studied crash data in the 99 largest U.S. urban areas and estimated the total costs to be $299.5 billion. Traffic congestion wasted 4.8 billion hours and 1.9 billion gallons of fuel a year for urban Americans. That translates to $101 billion in lost productivity and added fuel costs.

Shared Robotic cars could reduce the costs for taxis and transportation by five times: 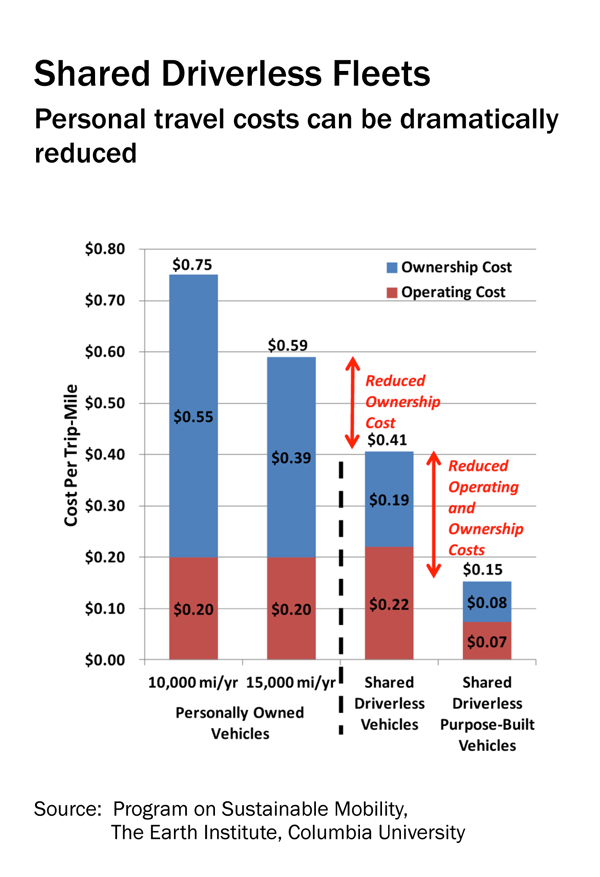 A senior who cannot drive might easily pay $4000 per year for transportation. This is usually on a fixed income. Lowering the costs by five times would be $800 per year for transportation. Young people (under 16) who cannot drive would have mobility options other than being driven by their parents. Society will have a lot more net benefits from robotic cars.