Emerging world: what to expect from the currencies and the bond markets?

The prospect of less quantitative easing in America has rocked currency and bond markets in the emerging world. There are many reasons why a fund manager might want to sell the rand. South Africa’s economy is barely growing. Unemployment, at 25% of the workforce, is on a par with the grimmest parts of the euro zone. The mining industry is beset by labour unrest just as commodity prices are falling. The country’s large trade deficit is a sign that local producers are struggling in vain against foreign competition. The rand has fallen by 16% against the US dollar this year. Only the Syrian pound and Venezuelan bolívar have fared worse.

Yet these local difficulties are not the only reasons for the rand’s slump. South Africa has the financial markets of a rich country: it is easier to buy and sell bonds and stocks there than in most middle-income countries. So the rand is a convenient currency in which speculators can take a position on emerging markets more generally. As the fast-money crowd sense the beginning of the end of loose monetary policy in America, bonds and currencies in emerging markets are the assets they want to sell. The rand is merely the worst-hit in a long list of vulnerable currencies.

In the past month 19 of the 24 emerging-market currencies tracked by Bloomberg have fallen in value against the dollar. The trigger for this sell-off was a remark in May by the chairman of the Federal Reserve, Ben Bernanke, that the Fed’s purchases of bonds using central-bank money might soon tail off. The yield on America’s benchmark ten-year government bond has risen from a low of 1.6% to 2.2%. The prospect of a further rise in yields over time is likely to push up the dollar and draw money back to America from riskier parts of the world. The slump in emerging markets over the past month is in anticipation of such a trend.

It seems a violent response to what was an offhand comment. Mr Bernanke did not suggest an immediate change in policy. The Fed’s bond purchases will continue but perhaps not for long at the present rate of $85 billion a month. An increase by the Fed in short-term interest rates, currently near zero, may still be years away.

Even so, the prospect of a tapering in the Fed’s bond purchases probably marks the start of a long grind upwards in American bond yields to more normal levels. “It won’t be a straight-line affair,” says Kit Juckes of Société Générale. Interest rates will bobble around in search of the right price. The absence until recently of such volatility has made rich-world investors comfortable with exotic punts in emerging-market bonds. As the waters become choppier, they will be far less willing to take such gambles. Tougher capital requirements mean that trading desks of banks are now less keen to buy and hold assets dumped by investors: that will only make bond prices more volatile. 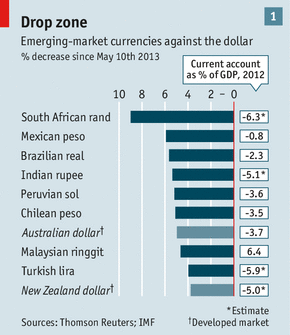 The most vulnerable countries are those that rely on foreign capital to bridge the gap between what they spend and what they earn. South Africa has a biggish current-account deficit relative to GDP: the rand has suffered accordingly. Its standing has also been hurt by weaker commodity prices, in part because of slower growth in China. A handful of other countries, from Chile and Brazil in the emerging world to Australia in the rich world, share the debilitating status of having a commodities bent, a biggish current-account deficit and a wilting currency.

The currencies of some commodity importers are also wobbling. India has a current-account deficit of 5.1% of GDP; the rupee fell to a record low against the dollar this week. Turkey relies on hot money to finance its deficit. The protests in Istanbul are just one more reason to sell the lira.

Is this a panic or something more serious? Emerging-market currencies have endured the occasional bad month only to bounce back. The Fed is likely to tread carefully. But even a slow, steady rise in Treasury yields and a shallow dollar rally would spell trouble. Around $4 trillion has washed into emerging markets since 2009, according to Stephen Jen of SLJ Macro Partners, a hedge fund. Much of that has been “pushed” abroad by the low yields on offer in the rich world rather than “pulled” by the prospect of superior returns, says Mr Jen. If only a fraction of that capital is yanked out by jittery investors it would turn a sell-off into a rout.

Past episodes of dollar strength and rising Treasury yields were followed by currency and debt crises—in Latin America in the early 1980s and Asia in the mid-1990s. Things are now different in one important regard, notes George Papamarkakis of North Asset Management, a hedge fund. In the past rich-world banks lent to poorer countries in dollars. When capital flows reversed, borrowers were left with debts that grew larger as the dollar strengthened. By contrast the recent flood of capital went into local-currency bonds. For a while investors enjoyed a virtuous circle of higher bond prices and stronger currencies. But they now face losses that are likely to grow. 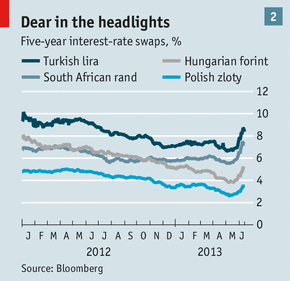 So some of the pain of adjustment will be felt in the rich world. Central banks in emerging markets can even profit from it. They can sell the dollars that they added to reserves on the cheap while at the same time checking the fall in exchange rates. But emerging markets cannot escape the fallout. Even the shallowest of turns in America’s monetary cycle is amplified there: interest rates are rising in some countries as foreign buyers for local-currency bonds dry up.

Not so long ago there were complaints that the Fed’s loose policy was pushing up emerging-market currencies to the detriment of exporters there. Now they are falling. But the results won’t be painless. Export-led growth is not nearly as much fun as a consumer boom spurred by cheap foreign credit and a dear currency.

Disclosure: this article is distributed for educational purposes only, and it is not to be construed as an offer, solicitation, recommendation, advice or endorsement of any particular security, product, or service. All materials presented are compiled from sources believed to be reliable and current, but accuracy cannot be guaranteed.